All of you, I expect, especially those of you who think there may be potential for a new flavoured gin! 🙂  Well, I’ll put you out of your misery in a minute. But first… a little story…

A few days ago, Guyana Gyal’s post about Mr.Wrong.Car made me think of someone I knew, a long time ago, in New Zealand.

Like Mr.Wrong.Car, he was also despised, avoided and perhaps feared by many people. True, he was …eccentric. And with an aversion to soap and water. But he was , in reality, a gentle man and phenomenally intelligent in the field of plants, both native and introduced. He had a better than average knowledge of marine life, too. He gave me a shell once and told me its scientific name , though I have long forgotten that!

But most people called him Spring Heel Jack and rude little kids used to tease him and run like hell when he shook his fist at them, calling them names they probably deserved. He’d an extensive vocabulary of very colourful swear words!

He lived alone in a shack alongside the Otumoetai railway line and I always thought he had no friends. But his knowledge was greatly respected by museums and some school teachers. Perhaps Mr. Wrong.Car was like him. (If you’re interested, you can read more here ) It’s easy to write off people who don’t “fit the perceived pattern.” But how much humour, wisdom and love might we miss? And it’s not difficult to stay upwind when necessary!

I was scratching around in a box, looking for a particular item when I found something I thought I’d lost. As you do. Actually, I found three somethings and that led to an interesting morning in my friend’s studio, running some old plates through the press, to see whether they really were too badly marked for pulling good prints. Hmm…not the best, but at least I have the plates and can make new ones from old images. Well, once I’ve figured where and how to etch them! Not with nitric acid (which is what I used last time, under guidance in a studio) which is rather nasty stuff, especially in a home environment. I’m ” doing the homework” on another chemical, with much friendlier properties. But these are yesterday’s prints

My national emblem (and national nickname!) 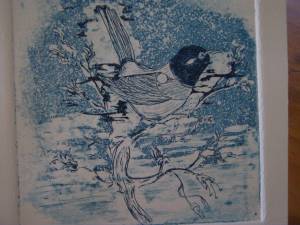 Personally, I think the background ruined this plate , but I think I can salvage something from it. And at least I have the cartoon. 🙂 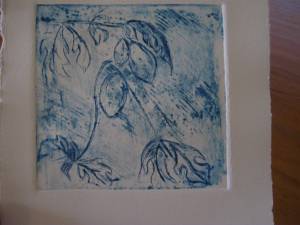 I have some sketches waiting to be turned into prints, among them our mystery picture! The seeds of a Fishtail (Caryota) palm Which one I’m not sure, but I do know that at least one, Caryota urens, is also known as the toddy palm, or wine palm. So perhaps there is a gin possibility. Someone else can do that research! Here’s the photo I cropped to tease you. 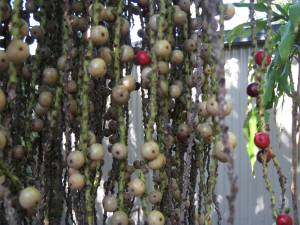 One more (crappy lighting!) picture before I go out to play with hoses. A few weeks ago, The Man and I went to a small showing of prints, photographs  and paintings by a talented young  woman. The Man remarked that one, in particular, reminded him of some of Andrea’s work( we have half a dozen of her drawings and will soon have “Water’s Edge”!). So I bought it!

This is an etching with aquatint and coloured inks.

And thankyou to those who popped over to Ziggi’s place with cheering words.