Every once in a while, someone comes up with an idea that is dazzling in its brilliance, breathtaking in its simplicity. Like the famous Swiss Army knife.*

Who doesn’t need a clip-on-your-belt compendium of knife, cork-screw,can opener,scissors,nail file  and that jolly- handy- thing- for- taking -stones- out -of -horses’ -hooves? Sheer genius!

And, of course, there are the cheap knock-offs. The trouble with those is that they tend to fall off your belt or key ring and become (potential) tyre perforators.Or get stuck in horses’ hooves!

Like this one. Well, that’s our guess as it was the only  possible thing on the road when we walked back to look. After The Man had put the spare tyre on. 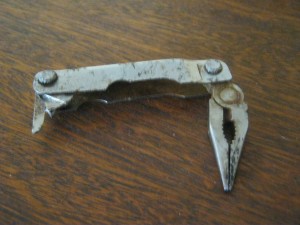 So…that was Tyre #1. On the just-picked-up hire car. Back home a few minutes later, The Man frowned and said:”I think that’s a screw head stuck in the tread.” Not the hire car this time. No, our car. sigh…

So now we have two tyres to go in for repair. And, hey! why stop there? One of the Mustang’s wheels was sitting a bit low…sigh…

So today began with a trip to the panel beater to (finally!) have my Toyota fixed, then to the tyre shop and I may just have to “park” this in the drafts folder as I have to take The Man back to the hire car pick-up as he’s driving out West this afternoon and the repaired tyres      are ready to collect on the way home.

… much later…the internet connection died and I’ve just had another trip downtown on my temporary wheels. Good practice, I suppose. So far, I’ve been “doing a Jeremy Clarkson” and picking holes in the poor little car! yes, of course it’s a web picture! You don’t think I know this fellow?

Unfair, really, as it’s quite a cute lil bug. But if I were going shopping for a new car…I wouldn’t buy this!

And now, after all the drama, I’m feeling a little “tyred.”

*When I went to their website for the picture I noticed that, these days, they even do fragrances! Good grief! Who’d have thought…The perfect personal perfume for smelly Swiss soldiers?