(and a spider alert!)

The 3801 (train folk say thirty-eight oh one) is probably the most famous steam locomotive in Australia. Oh, OK, I might be shot down by those who like others better. But there is no denying that 3801 is  one helluva train.

I’m not going to type up all the specs; you can read the details here.

Back in 1988, as part of the Bi Centennial celebrations, the Flying Scotsman was brought out to Australia and the 3801 was run with her.

It was a drizzly day when a friend and I drove up to Brisbane for our run of a lifetime. Two of the best loved trains in the world and we had tickets to ride!

On parallel tracks, slowing and overtaking (there were a lot of cameras on both trains!) from Brisbane to Ipswich and back. The ride of a lifetime.

We were on 3801, which meant we got some wonderful shots of the Scotsman and, back at the station, despite the rain, some decent film of “our” engine, too. I should still have the negatives, but, despite  a search of several boxes, I can’t find them. This poor sketch hardly does the grand old lady justice.

Now, at about this point the arachnophobes can leave us and go and make a cup of tea. Check the teapot, first! 😉

edited to add this        http://www.lastwordonnothing.com/2012/11/13/abstruse-goose-disproportionate-reaction/     gotta love the Goose!

When I was much, much younger I hated spiders. I kept telling myself I wasn’t scared, I just didn’t like them. This didn’t stop me from playing “up in the bush” as we called a rough patch of weedy trees and manuka   http://en.wikipedia.org/wiki/Leptospermum_scoparium
And lots of spiders! I remember, chiefly, the nursery spiders

And one nasty little boy, knowing I hated the  things, delighted in chasing me with a manuka branch, complete with a web and, usually, a rather cross Mrs.Spider attached.
One of my natural phenomena books had a photo of a tarantula and for years I kept a piece of paper folded over that page. Yes, really! I was such a sook. But that tarantula,or rather, the picture, helped me. How?
I traced the photo. Then kept drawing around the outline, enlarging it each time. And then I pasted the ever-expanding spiders (I just glued the feet so that they “came up” from the page) into a book which I used to look at every day, telling myself they were “my” spiders and I was not scared. But I never did grow to like Charlie!
I was, however, quite enchanted with this when it popped up (ooh! see what I did?) in my reader this morning  http://www.behance.net/gallery/If-I-Were-Victorian-Pop-up-Books/272651
And that segues nicely to something else I’ve been doing… 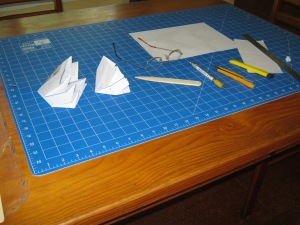 More details of that when all the books have been completed and sent to their various homes.
Time to put on my chapeau de cuisine…