So, what have you missed? Not a lot. We had some extremely hot, dry weather which had most of us rushing about with hoses.That would be the daft buggers! The rest of us conducted ourselves in a calm and exemplary manner.We took very good care of our synovial hinge joints. Which, in turn, supported vintners in fire-ravaged  and drought-stricken areas.

You see, your humble blogger does have a social conscience!

We’ve had a little cyclonic disturbance here! By cyclone standards it was pretty ordinary.Well, we all expected much worse from Dylan, as the boffins named it. I think they chose the name as representative of that dopey hippy rabbit on Magic Roundabout!

And now we have good, soaking rain.The gardeners will be happy…

I wandered down to the beach on Friday with a little camera in my pocket.

A casuarina wrenched from its position above the tide line;roots twisted and broken. 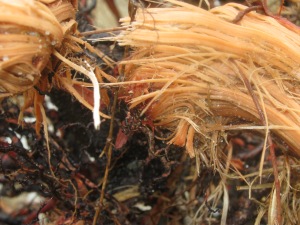 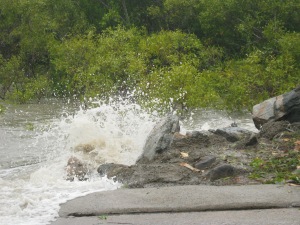 There’s a slipway somewhere under that! 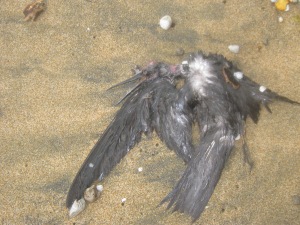 This poor chap didn’t make it!It might be a juvenile sooty tern, but I don’t know.

I met people from beach-front houses filling sandbags.A tad late, I thought, given that the King Tide had been and gone!

From Sunset Beach, I walked along Mango Avenue…

Where, predictably, mangoes littered the road and became a feast for birds. 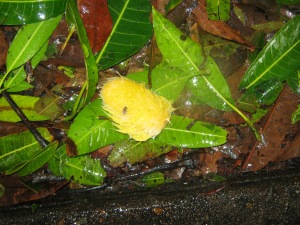 A mango seed after lorikeets had had a party. 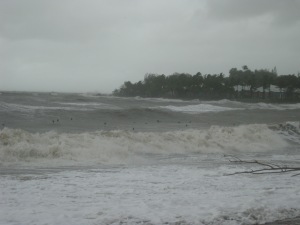 If you click the picture, you can see sooty terns (I think!). Usually, the only seabirds we see up here are a few terns and maybe once in a blue moon, a seagull, probably a silver gull. Different story down at Harbour Beach, The Marina and even , sometimes, CBD. Free-loaders and thugs!

Back home, somewhat damp and salty, I snapped a couple of rude (as in: not polished!) pictures of some Cananga odorata stems. That’s the source of ylangylang perfume,in case you’re wondering. A branch had been knocking against the house roof for ages and The Man was concerned that Dylan might use it as a sort of can opener. So, with a pruning saw on a long handle, he cut the branch. Fortunately, that tree has very soft wood! I brought a couple of stems indoors, but it’s not really a picker. The kitchen smelled nice, though! 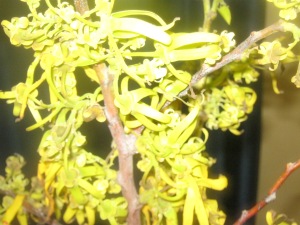 Cananga flowers.About as close to Forsythia as I can get in this climate!

Now, the rain has stopped so maybe I’;ll take a load of snapped branches, palm fronds and prunings up to the dump. Glamour queen, that’s me!

Because, as the pundits watching events in Cairo(and, indeed, in Washington ,DC) keep telling us, we must know the truth. We cannot allow emotions to cloud the facts.

But first, an amusing diversion…

A friend recently wrote that he was delighted to find in his mail box a flyer claiming that he could “have sex at seventy-seven!”

My friend said that, as he lived at #3, it wouldn’t take long to walk home afterwards…

He’s a bit of a wag, this friend.Sends me all manner of funny stories. Today, he’s sent me this link

A couple of hours ago (0500 EST/USA, or 5am New York) Queenslanders were expecting the cyclone to cross the coast in a few hours, probably around Townsville/Bowen

So the poor buggers further south had better refill those sandbags.

I think I’ve come to the conclusion that travelling has limited appeal for me these days.

It’s the travelling bit that I’m getting tired of. Being herded onto enormous aeroplanes with far too many seats and no elbow room has lost any romantic appeal it might have had. Perhaps I’m just getting old?

So, did I have fun in the Land of the Long White Cloud? Yes!

This was a family-oriented trip, but I did set aside one day for playtime. I’d heard about the art exhibitions held in a woolshed, but had never timed my holidays to coincide until now.

So…off we went, in bright sunshine, heading for the wildlife sanctuary at Tawharanui.

And this time, we went through the new Orewa Tunnel. (It was being built on the last visit.) 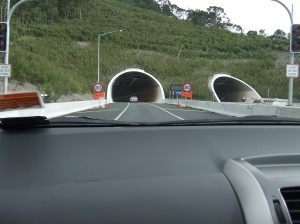 Yes, it does look a bit like something from Hobbiton! And I think the Hobbits might have managed things a little better. A lot better, probably!

We stopped at Warkworth (see my banner, above) for coffee and The Man picked up a brochure about the Woolshed show. A very helpful woman suggested he might also like to see another show, nearby, and gave him another brochure.

Coffee-fuelled, we set off for the first exhibition, by the Mahurangi Group. 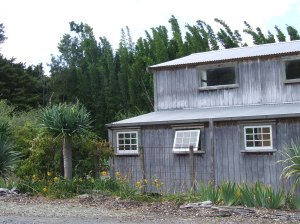 Regular readers will be familiar with Barnacle Goose in my comments. Over the past year or so, Carol and I have formed a wonderful cyber-friendship and we hoped to meet at Tawharanui.

Well, sometimes Fate has other plans…

Esther and I were looking at sculptures by another friend and I glanced up to see Carol! She and her friends were also “doing both shows.” 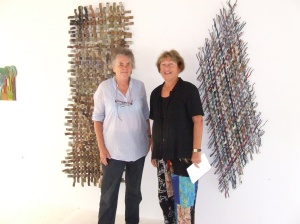 And guess who we bumped into, a couple of hours later at the Tawharanui show?

I do have a few more pictures, but have not sorted them all yet and there’s a bit of yard work to do ahead of the cyclone.

Yes, Ului is expected to cross the coast tonight or tomorrow morning. Although  some way north of us and downgraded to Category 2, it’s still going to be pretty breezy so we’re battening hatches and restraining loose objects.

There was some “panic-buying” at the supermarket yesterday. All I can say is if one family eats ALL the cans of beans they bought it will contribute greatly to methane emissions…