Thankyou, everyone, for your kind words about Rusty.

And now, moving on to other things… ( I wonder if there is a word [a syndrome, perhaps?] for people who go a bit silly with ellipses?)…

Most of my readers are much too young to remember the war. See? Even I am so old I still say “the war” without defining it. We currently have so many wars on the go one needs to keep one of those planner charts to keep up with the state of play.

But the war I’m talking about here is The Second World War. WW II, as we used to write it in the old days, in order to save ink and time.

Europe had been tearing itself apart for some four years and a lot of people could see no end in sight, despite stirring speeches from Mr. Churchill (on one side of the Channel) and Mr. Hitler (on the other side.)

England was re-smelting park railings to keep the RAF flying. Housewives were doing innovative things with dandelion roots and hay boxes. When drapers ran out of black cloth people improvised with all sorts of plant dyes. Small boys couldn’t make catapults  ‘cos their mothers had no spare knicker elastic.

And social evenings were held to boost morale. Even in far-off outposts of Empire. 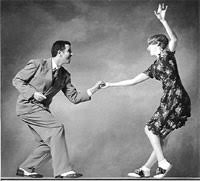 And so it was that two friends, in a city a long way from the bombs of the Luftwaffe (but a wee bit scarily close to the torpedoes of Japan), decided to go to a “cheer the soldiers” dance, billed as  vice-versa.

Katherine was a whizz with the sewing machine and she made a pair of culottes with one full, silky, flowing leg and one plain serge leg. She topped this with a 50-50 shirt – one half plain white, the other half cut from a chintz curtain in a flowery red and pink pattern.

…was refused entry to the ladies’ powder room!

…or probably not! But it’s a good story so read on:

I’ve mentioned (once or twice) that I swim, during warmer weather, at an outdoor pool. Lashings of 30+ sunscreen, of course.

This pool is just off the highway and on a busy city road so yes, we get the odd whiff of diesel as big trucks grind down or up through their gears. We also get more than a whiff from the kitchens of at least two burger bars. Early in the morning, when the coffee is fresh-brewed, it’s not too bad. But the burger smells? Let’s just say that this would make a good way to convert the carnivores!

Anyway, once into the stroke/breath rhythm I can usually block the oily pong.

I was trying to improve my backstroke (I have a terrible tendency to go sideways!) when I noticed a pretty blue bird perched on an overhead flag line. Blue? Not a wren. A swallow? what the…swallows are not blue. Well, not that bright turquoise. Not around here.

I stopped at the end of the lane and looked again. Sure enough, they were swallows, flitting across the water, sometimes skimming the surface, and perching on the flag lines. And they were BLUE!

But a good field researcher never leaps to conclusions, right? So I finished my 2 kms, went shopping , had coffee with a friend. And when I got home I grabbed all the bird books and looked for swallows. That narrowed it down a bit since most of our bird books are on raptors, but I did find some swallow entries. And none of them this distinctive blue!

Did I send faxes and emails to universities? No, I did not. And a good thing, too, as I had a closer look at the swallows next day.

Did I mention that the pool is blue? The big shade cover is a deep turquoise? The tiled coping is, yes, blue.  And the Barn Swallow’s breast is a pale creamy shade. And the sunshine very bright!

So no Hirundo rustica dinahii . But you might like to check this link. Just in case I’m wrong. I’ll credit you in my paper!

And this is moi, demonstrating the correct method of holding a raptor without injury to either party. It’s a very old photo, but I think that’s a juvenile kestrel.

Moving on now from birds (well, clearly, I’m not an expert, so I think I should move on!) to the felines Chez Dinahmow.

I’m sad to report that Rusty is nearing the end of his road. A long and eventful road, it must be said.

He has been with us only a few years, but it seems so much longer. Long-time readers might remember that Josh was still here when Rusty arrived. There was, naturally, a little squaring-off and the odd contre-temps, but they settled  matters amicably and were good friends.

Early in his life, Rusty made the mistake of tackling a whip snake. This cost him some time at the vet’s and his then family a rather large bill. But, despite the odd scratch and the general wear-and-tear of many years, he’s managed to keep his looks.

Right now, the old boy’s in a sunny patch in the garden, but I’ll bring him indoors soon as I have to go out and he’d be too vulnerable on his own.