Only a week (ish) since I was entertaining you and here I am again!

Not a lot is happening around here as the rain is still hanging around. That’s fine by me as my herbs are doing well.

But the major overhauls have had to be put on hold until things dry out a bit.

Remember last week I said I was hopeful of masses of crimson flowers on the Megaskepasma eryth…etc? Well…

Erm…no. I scrambled up the back fence and took this shot of Bob the Builder’s bush. Hey! It’s not cheating if you tell the truth.

And this morning i discovered this…

Let’s see who can guess what it is. Try not to be too rude. MURIEL!

Our internet/phone change-over is all set now.It took a while and required someone to be here to answer the ‘phone and I have still to compose a non-dorky message. I favour something like: “If your call is important, leave a message and if I think it’s important I’ll call you back.” But The Man says I can’t do that. Wanna bet?

We were enjoying an afternoon glass of wine the other day when I spotted a moth between the window and the wire screen. It was a bit tricky, but I managed to flap a tea towel and drive it down to where I could reach it and release it. There was no time to get a camera (despite having at least two fully-charged!) so I let it go.What was it? Mr or Mrs Dysphania, parent of the Yellow Fellows. Here’s one from the internet

I know the lovely Scarlet staged a Sunday Music coup last week and she can still host that (unless Mago wants it back!)

But I’d like to leave you with some “local” flavour. Just close your eyes and imagine you’re one of the first Europeans to hear this sound. Would it have given you the willies? https://www.youtube.com/watch?v=cLu9GmV2vF0

The picture I posted last week was of the buds. And while these things are ridiculously easy to grow, (heck! I had one in a pot in London!) I have been frustrated at every turn in this garden.Mainly damage from stonking great palms dropping fronds onto the flower stems, but also hungry bugs (not sure what as I never saw the beasties) and general malaise when we don’t get good rain.

Ah, but this year I have flowers coming through on this pink one and two more which I believe will be a lovely apricot shade.And one might even be cream. I shan’t break into the happy dance just yet…

Here is something else that makes me smile…Cassia fistula The tree needs serious pruning (again!), but we’ll wait til the flowers have finished. 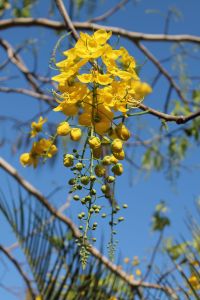 And a yellow Heliconia.This is next door and I much prefer it to the harsh orange ones that keep reappearing in my yard!

And, because I can, an old picture of long-ago cats.The ginger one and the tabby were sworn enemies…except on a cold night when they agreed to suspend hostilities and share the fireside sofa! The Siamese Fighting   Cat didn’t give a damn, one way or the other!

And here’s something else that pleases me.Very much! Geiger, despite training, deterrants,cussing has always been a shredder.Of shoes and furniture, mostly.When they were itty bitty kitties I got them a scratching post.Nope, Geiger still went for shoes and sofas.But last week I bought a fancy-dancy scratcher made of compressed corrugated cardboard (yeah, the makers know a sucker when they see one!).It came with a small sachet of cat nip, to encourage  the cats to use it. Well, guess what? Geiger LOVES it.I am almost allowing myself to dream of  new furniture. 🙂 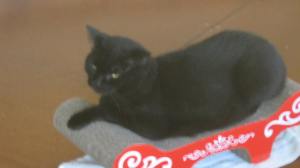 …some sort of fern. Nope, no idea what. Maybe something like a Blechnum. Maybe not. I was nosing around in Alison’s husband’s shade house the other day when I saw it.

So…thank you all for playing along; wasp nest and snake skin came close.It also looks a bit like the sort of thing beginning knitters produce! Fine yarn on big needles and lots of dropped stitches!

Geiger has been helping me in the garden. She is clamouring to post her own pictures. I told her she might have to wait as I have a lasagne in the oven. And an empty wine glass. Horrors!

Off to remedy that right now…

Why? Because I’ve made contact after a long, long hiatus, with some old friends. And because I can!

Funny, sometimes, how one name or sound can conjure another and your past suddenly spills into the here and now.

I heard a young kid scraping a violin at the mall. A notice propped up on his fiddle case read: foR music lesSon. (I was tempted to toss in an extra coin for signage!)

But my mind had one of those dazzling flash-backs and I was sitting in an art class with the new art teacher. He also played violin and, I think as an ice-breaker, had brought his instrument to class.

He played a few notes then passed the violin to the nearest girl. “Have a try,” he invited. She scraped the bow across the strings. Yep, that’s the sound you’re all thinking! The violin went around the class and no one mentioned Jim.

My turn. More finger nails on a blackboard. I passed it to Jim and whispered “Play ‘Cindy.’ ”

He adjusted the strings, drew the bow across (for effect) and launched into a current hit tune. We all sang. Not sure that there was any drawing done that day…

And the song? Well, it was quite a hit for Eddie Fisher and it survives on Youtube.

For an embarrassingly long time I drove past these, thinking they were propellers. Ignoramus! They are, in fact, giant-sized “fish bones.”

By Fiona Foley, who also created the  Pod (below) further along the Trail.

Image from here.  Have I mentioned before that I love public art?

We haven’t had a “mystery pic” for a while, have we? Let’s see what’s in the junk folder that I can tease you with…

OK…you know the drill. Tell us in comments what you think it is. I’ll let this run til Monday.

And do scoot across to the cats’ blog to see a rather lovely little video.